We all know that the Amazons are supposed to be an ancient race of warrior women. Most of us are aware of their connection to Greek mythology, but we don’t have a much more detailed mental image. We have no idea where they were supposed to be, for example. We don’t know their battles, exploits, or anything of the kind. There’s certainly no equivalent to Hercules or King Leonidas among the Amazons in the cultural consciousness. (And most of how we view them is based on Wonder Woman, right?)

It turns out that while historians and archeologists have lots of evidence at their disposal, they don’t have a very conclusive portrait either. Still, significant aspects of this famous group of warrior women are there to be found. Let’s have a look at them, and their portrayals through history.

By the late 20th Century, Amazon warriors were thought to be no more real than the Hydra or Poseidon. Even serious Ancient Greek historians are considered unreliable, such as Herodotus, who is also known as the “father of lies.” Archaeologists had to look fairly far from Greece for reliable evidence of anything resembling the Amazons.

In 2014, the New Yorker reported on the findings of a series of excavations that were performed in Eastern Europe between the Balkans and the Caucasus Mountains near the Black Sea. In this territory, roughly 37 percent of graves were those of women who bore strong forensic evidence they lived a military lifestyle. This evidence included bow legs from a lifetime of strenuous horse riding and being buried with their weapons. The communities in the area included the Scythians, who matched the unearthed warrior women in spending much of their lives on horseback.

There are Amazon warriors portrayed on urns and mosaics all over Greece. They were consistently portrayed with decidedly Greek features and in their traditional garb. Naturally this was not very accurate for a bunch of nomads on the other side of the Black Sea from Greece, though accurate descriptors are sparse.

Rather than wearing Greek tunics and dresses, Amazon warriors are speculated to have been some of the first people on Earth to wear trousers, which were much less likely to get in the way while riding a horse. Analysis of their remains shows that they were on average about five feet, six inches tall. That was very tall for women during the time period, even if it doesn’t sound like the towering heights the descriptor “Amazonian” conjures these days.

Since there is no known society today that claims to be descended from the Amazons, there’s the inevitable question of what wiped out the Amazon warriors, or what culture absorbed them? The answer seems to be twofold.

First, Scythian culture in general evolved into Sauromatian society, and from there into the Sarmatians. This process has been roughly estimated as taking place between 600 BC and 400 BC. The main difference appears to be that Sarmatians were more inclined to trade than raid. They’d even done a considerable amount of trade with the Roman Empire itself. This relatively peaceful evolution by the Sarmatians was canceled out around 370 AD when they were conquered by a much more familiar civilization: The Huns. Fans of the Amazon warriors can at least take solace in the fact that it took one of the mightiest empires of the ancient world to defeat them. 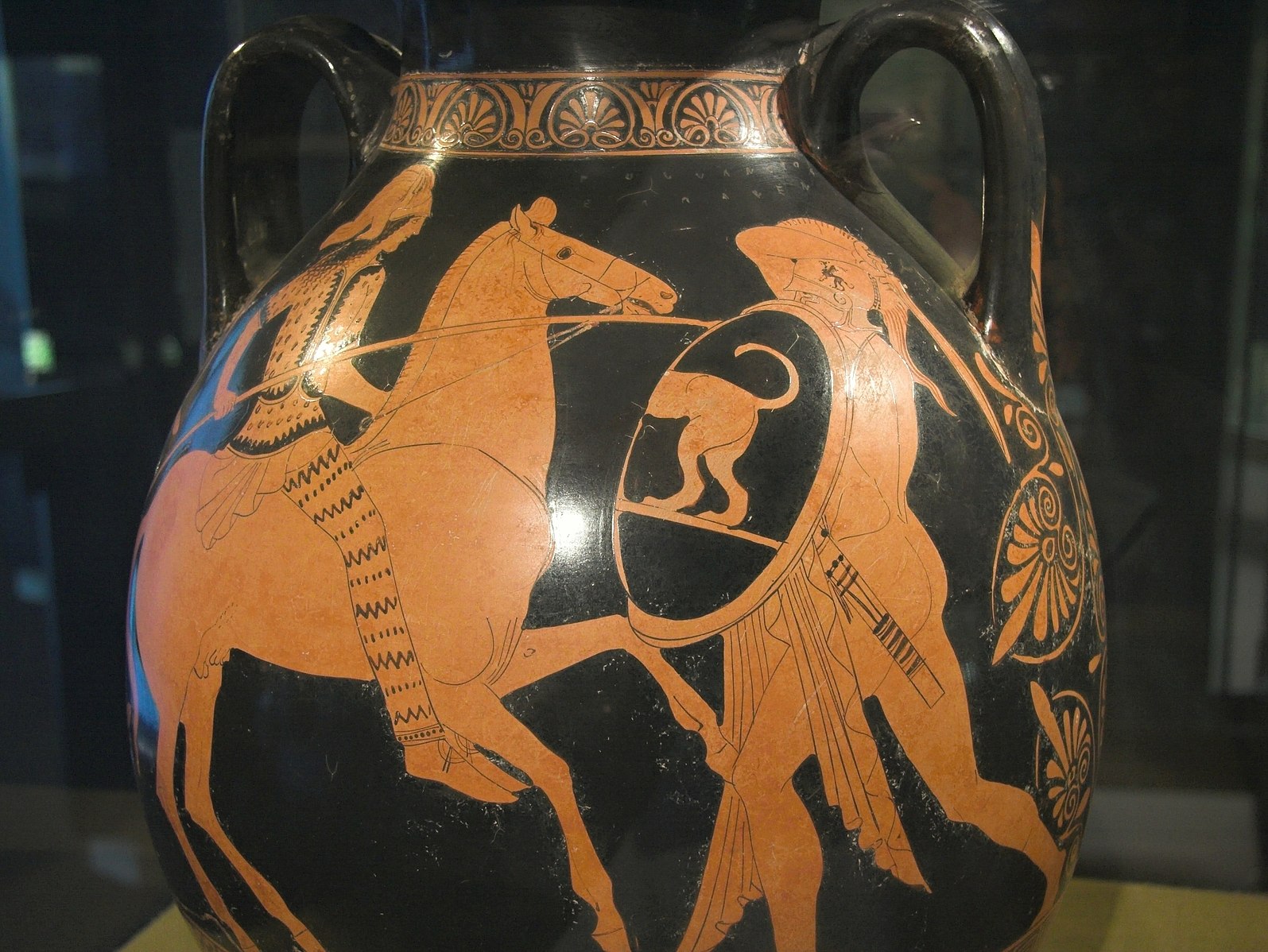 While Greek mythology and history is full of portrayals of the Amazons as honorable elite fighters, there was something very consistent in the myths about them: They always lost. No matter how noble or how capable, an ancient Greek writer just couldn’t seem to imagine a war ending with the Amazons on top.

First off, Hercules himself had to go take a belt, a gift from the God of War Ares, from the Amazon queen Hippolyta. He won it either because she let him have it or through force of arms. That was followed by Athenian king Theseus kidnapping the Amazon Antiope, and when the Amazons sent an army to get her back, Theseus defeated them in battle at the loss of Antiope’s life. Next came the Greek hero Bellorophon, went to successfully fight the Amazons just after he had defeated a monster called the Chimera. Finally, there was Queen Penthesila, a warrior so formidable that Herodutus credited her with inventing the battle axe. Unfortunately for her she chose to go to war against the Greeks during their legendary war with Troy and got killed by the famously invincible Achilles, her eyes being removed from her head for her trouble. As great as the Greek storytellers insisted Amazon warriors were, you have to wonder if those writers really believed it.

The Ancient Greeks had no monopoly on accounts of the Amazons. The Chinese equivalent were the Xiongnu, and they lasted from roughly 300 BC to 100 AD. The ancient accounts agree that they were primarily mounted warriors, and as such lived nomadic lifestyles. They also explain that the female warriors favored archery over hand to hand combat. Considering how that method later allowed the Mongols to carve out the largest empire in the world, it was a pretty sound approach.

Excavations of Xiongnu burial sites revealed quite a bit about their accessories. Female warriors wore jewelry that included turquoise, jade, and even polished coal. They had a curious form of fashion coordination where the male warriors wore iron belt buckles while the women wore either bronze or coal buckles. The buckles which could be as much as about a foot wide were decorated with an array of animal etchings that included yaks and dragons.

The Persian Empire fought the Scythians just as the Greeks did, but they had another enemy whose ranks included warrior women. They were called the Saka, and they were on the opposite side of their empire from Greece. Some of the Greek myths of Amazons are thought to have been influenced by those of the Persians. Stories, such as “Median Romance,” tell of warrior Queen Zarina and date back to as early as 625 BC. Cyrus the Great, the emperor who turned Persia from a collection of tribes into the (then) mightiest empire in the world, was said to have fought a battle against a Queen Tomyris.

Evidence of ancient warrior women emerged within modern day Iran in 2004. During excavations of 109 skeletons, Alizera Nobari found one that had been buried with her sword, and had DNA tests performed to confirm that the corpse had actually been that of a woman. Tests were planned for the other bodies, but since there was one confirmed warrior woman in their possession already, it was decided there wasn’t really a need to conduct any others.

So, considering the Amazon warriors were inspired by tribes called the Scythians and the Saka while no ancient place in the vicinity called Amazon existed, where did the name Amazon come from? For awhile, the prevailing theory was put forth by Hellanikos, the Fourth Century BC historian from the Isle of Lesbos. Supposedly it was derived from “Maston,” the Greek word for “breast.” The “A” was put on the beginning because Amazon warriors were known for cutting of one of their breasts to improve their archery. This has been dismissed because it would be ridiculous for real Scythian warriors to amputate portions of their anatomy, as the risk of an infection would have been extremely high for an ancient nomad.

Professor John Caloruso of McMaster University has a completely different theory. He points out that the Scythians had a neighboring tribe in the Caucasus mountains called the Circassians. The Circassians had a figure of legend named Lady Nart Sana and her title was “Forest Mother,” which in their tongue was pronounced “A-maz-ahn.” It seems unlikely to just be a coincidence.

In 2015, it seemed as if contemporary people might get our first authentic look at an ancient Amazon warrior’s face. Among the Altai Mountains, a range which spans Siberia, China, and Mongolia, the remains from a tribe called the Pazyryk were being studied for being another potential inspiration for the Amazon warrior legend. A Swiss taxidermist named Marcel Nyfenegger took the remains of a body that had been buried with shields, arrowheads, axe heads, and cowrie shell jewelry (the indicator that the body had been female), and gave her skull a facial reconstruction.

Nyfenegger had apparently selected the wrong skull to work with, or his technique needed serious reconsideration. A DNA test revealed that the supposed woman warrior was actually male. To date, there haven’t been any reports of anyone trying to do facial reconstructions with any ancient warrior remains that have been confirmed to be female.

When most people imagine a fearsome ancient warrior, probably one of the last things they’d imagine the person from long ago enjoying is some wacky tabacky. Still, it was one of the pastimes Herodutus insisted that the Amazon warriors indulged in, with special tents used for this purpose. This was actually the first recorded use of cannabis for intoxication in history. It would likely have struck his peers as a peculiar method to become intoxicated, for Greeks at the time primarily used cannabis plants to treat upset stomachs.

In this case, Herodotus has firm support for his claims from archaeology. Not only was hemp smoked by the Scythians, many graves for both genders were found that contained hemp-smoking kits in them. No doubt many firmly insisted to the end that it improved their combat prowess.

If you’ve ever wondered what warrior women in Eurasia have to do with South America’s vast river basin, that’s on Spanish explorer Francisco de Orellana. In 1542 he became the first European to lead an exploration of the river, looking for the City of Gold. He insisted that he saw women warriors with the trademark amputated breasts, and thus named the river in their honor even though the Spaniards mostly fought them, with his chaplain Gaspar de Carjaval insisting they sometimes fought like 10 men.

Even before the 1500s were over, doubt was being cast on Orellana’s tales. In 1595, Walter Raleigh explored the Amazon River and said that while he heard talk of warrior women he never saw one. Even back then, he was dismissive of the idea that they cut portions of their breasts off, if they were real. To date there has been no conclusive evidence of an all-female tribe in the Amazon, so one of the most significant geological features in the world is named in honor of a likely myth. For comparison, imagine if the Rocky Mountains in the USA were called the “Sasquatch Mountains.”