Older than Texas’s status as one of the United States of America, the humble beginning of the Texas Rangers was when Stephen F. Austin formed a militia of 10 men in 1823 because he didn’t think Mexican militias were sufficient protection from Native American raids. Today there are 166 rangers and 68 support members. They’re such a beloved organization that there are state statutes barring them from being disbanded. Whole television shows and movies, such as 2019’s The Highwaymen, have been devoted to singing their praises.

It has been an incredibly active unit, and still is. In 2018 alone the Rangers launched 2,726 investigations that resulted in 504 convictions and 758 confessions. Let’s have a look at some of the most significant incidents from that long and storied record.

The Texas Rangers rode into the national spotlight in 1847, during the Mexican-American War. In late February, Zachary Taylor led an army of roughly 5,000 near Monterrey, Mexico. Counts vary on how many troops were in the Mexican army under Santa Anna, but at a minimum the Americans were outnumbered three to one. They also were in unfamiliar territory, and as Mexican army closed in, the American army was situated on the plains of Agua Nueva, which would have been exactly where a larger army full of cavalry like Santa Anna’s would have wanted them.

Fortunately for the Americans, Rangers under Henry McCullough were acting as scouts. On February 21 they reported the close proximity and overwhelming force of the Mexican army to Taylor, who promptly withdrew to the hills of Buena Vista. The high ground massively improved the effectiveness of Taylor’s artillery, and allowed the Americans to win a surprise — if costly — victory, which was vital to winning him the presidency in 1849 (although he’d die just over a year into his term). Taylor singled out the scouting by McCullough in his report and made the Rangers so acclaimed that Winfield Scott, who’d be the commanding general of all Union armies at the beginning of the American Civil War, specifically requested that they be transferred to his army.

The dozen or so tribes of the Comanche Empire that spanned through Texas, New Mexico, Oklahoma to Kansas have been featured in other TopTenz articles, but this will be the first time we mention their most notable clash with the Texas Rangers. In 1858, 100 Texas Rangers crossed the Red River into enemy territory in reprisal for horse raids. They had with them a roughly equal number of Native American allies from the Brazos Reservation. The fact their target community had roughly 600 natives in it meant that John S. Ford turned to deception for his attack, and thus had the native allies approach first without making their intent clear. That drew the Comanche’s attention while the Rangers moved in for an undetected attack.

Little Robe Creek was less a battle than a massacre, as when they charged the Rangers were running into villagers instead of warriors. Ford would report that he killed about 72 Comanches, including Chief Iron Jacket (so named because he wore old Conquistador armor), while only two Rangers were killed in the attack. It would turn out none of the horses that the tribe had were among the contraband mounts, so it was very likely an attack on an innocent community. Nevertheless, the attack was considered a sign in the United States that the Comanche were vulnerable to encroachment, and the Empire’s days were numbered.

About 20 years after their attack on the Comanche, the Rangers performed one of their most high profile pieces of law enforcement, especially for the early period. In 1878, the Rangers received a telegram from a gang informant that they were going to Round Rock to rob the bank. The event took on particular regional stakes because the gang was led by Sam Bass, a train robber of such a high profile that an estimated 200 books were written about his life and crimes. Even with a gang of only four, including the informant, Bass’s gang was considered especially formidable.

Two Rangers were immediately dispatched to Round Rock, but Bass’s gang got there first. They were unable to get word to local law enforcement, so it was only by nasty luck that Deputy Sheriff Grimes happened to be near the Round Rock bank, saw that Bass was carrying one more firearm that town ordinances permitted, and was shot immediately while trying to confiscate it. A prolonged shootout broke out, and it wasn’t until the Rangers arrived that Bass’s gang was driven out of town, with Bass being mortally wounded. Thus did the legendary law enforcers end another legend.

On June 29, 1893, Company D under Frank Jones of the Rangers was dispatched to Tres Jacales, an island community near San Elizario. In a mounted chase, they pursued suspected livestock smugglers into a settlement of four adobe buildings. Jones, whose wedding was only a few days before, approached the outlaws to demand their surrender. Instead, he was shot dead.

Rather than the Rangers coming to the rescue, this time they were bolstered by an  armed citizen force that raised their numbers to roughly 100 soldiers. The subsequent fighting was described by Ranger Corporal Kirchener as “his narrowest escape.” Although the Rangers triumphed in the end, it set the tone for many years along the border.

According to Ranger Captain J. M. Fox, on January 28, 1918, a force of Rangers, regular US Cavalry, and civilian ranchers rode into the farming community of Porvenir and were ambushed by some murderers that had taken part in a raid of a nearby ranch in December 1917. They were able to overcome the attackers and kill 15 of them. They then didn’t feel the need to report the incident for a few weeks.

In October 2019, the other side of the story came out on PBS. According to Harry Warren, the schoolmaster for the 140 person town and the son-in-law of one of the people killed on that day, the deaths were murders, to an extent that none of the victims had even been armed. Other accounts, such as those by the Flores family, collaborated his written account and pointed out how the way the Rangers described some of the people they’d shot was completely inaccurate. By this account it seems the only real reason that the killings took place was that the victims were of Mexican descent. 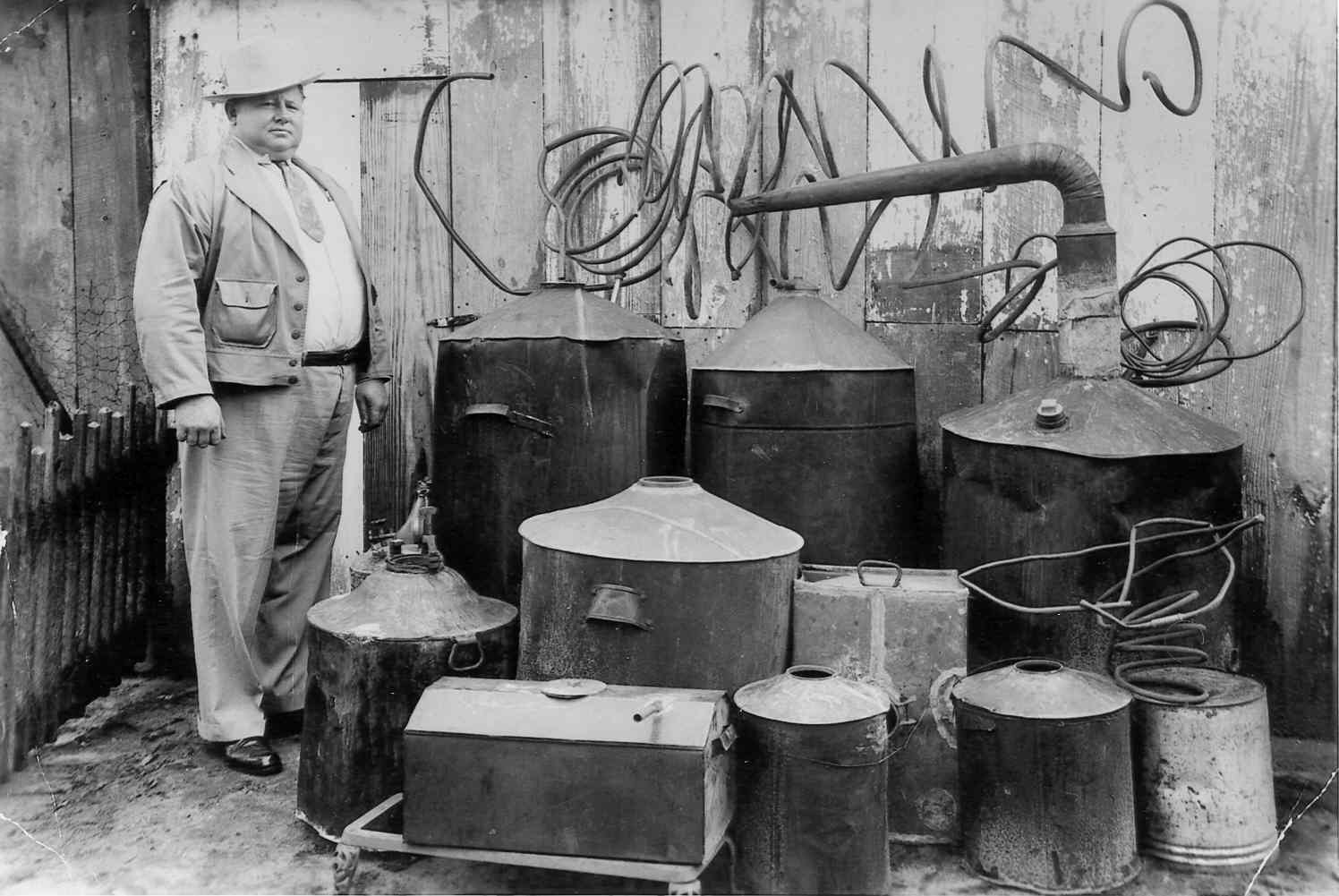 As impossible as this may be to imagine now, the 1920 prohibition of alcohol in America under the 14th Amendment and the subsequent Volstead Act were especially amenable to the state government of Texas. Counties in Texas had been banning hard alcohol since the 1870s, and by 1908, more than 60% of all Texas counties had banned it completely. Still, Prohibition is notorious for the raucous corruption it caused, which the Rangers naturally had to put down. In April 1927, the oil boom town of Borger in particular drew the organization’s eye, and Frank Hamer, the officer who later put an end to Bonnie and Clyde, was dispatched with seven officers to clean up the town.

The results were so extreme they were comical. For example, more than 200 slot machines were destroyed in raids. The mayor, the city commissioners, and almost the entire police force, including the chief, were compelled to resign. But most of all, in one day, supposedly 1,200 prostitutes were driven from the town, which sounds like so many that it must have massively disrupted the local economy. Borger remained so committed to vice that it wasn’t until February 1929 that the Rangers left the town.

Wealthy banker Don McNeil’s daughter Amy was walking to school on January 11, 1985 when a group of four men and one woman swooped in and kidnapped her. They issued a $100,000 ransom demand and told McNeil where to go for a subsequent phone call, the location also intended to be the rendezvous point where they would exchange the prisoner for the money. McNeil reported the kidnapping and received an escort of Rangers. McNeil’s limousine stalled on the way, but luckily, the kidnappers happened to drive by and Amy McNeil was spotted in the vehicle. This began a chase that lasted nearly 48 hours, went through three counties, and about 600 miles. According to the Chicago Tribune, it also involved the perpetrators firing shotguns out the car windows while fleeing.

Finally, at 4:30 a.m. on January 13, the chase came to an end. In a standoff, Ranger John Dendy rushed the kidnappers and successfully retrieved the abducted 13-year-old. Two of the kidnappers were wounded in the process, but Amy McNeil was uninjured — a satisfying capper to one of the most dramatic high speed pursuits in law enforcement history.

3. Headbutt with the FBI

The 1993 Waco Standoff that resulted in the destruction of the Branch Davidian Church under David Koresh was one of the most controversial, emotionally charged events of the 1990s. There have been theatrically distributed documentaries such as the 1997 film Waco: Rules of Engagement devoted to how the situation was handled. But as far as the Texas Rangers were concerned, even while it was in progress, they were open about their belief that the incident was a farcical failure on the FBI’s part.

On April 7, 1993 — 39 days into the siege that would ultimately last 51 — the Baltimore Sun reported that the FBI’s use of armored vehicles meant that they crushed rooms containing evidence that the Rangers would need for making a case against the church in the investigation of the murders of four ATF agents. Additionally, FBI negotiators also gave away to the cult pieces of evidence that law enforcement would need for their later case and which the cult set about destroying. When the situation ended in flames 12 days later, presumably the Rangers were unsurprised.

Before the decade was out, the Rangers were involved in another high profile standoff with another deeply unstable man. In 1980, Ralph McLaren began issuing property liens in Dallas that added up to $1.8 billion in fraudulent claims. By the ’90s, he had begun to claim that by legal technicality Texas had never formally joined the US and declared himself the Republic’s leader. He gathered together four people that were also willing to be citizens of the Republic at the Davis Mountains Resort. The situation became really serious when the Republic took Joe and Margart Ann Rowe hostage in response to one in their ranks being jailed.

The hostage situation dragged out for over a week and involved 300 officers and Rangers. The hostages were freed in exchange for the release of the jailed comrade. In one of the cannier moves that ended the standoff much less violently than Waco, Ranger Captain Barry Caver signed a cease-fire document for the Republic of Texas, therefore recognizing the group as an independent nation. McLaren ended up being sentenced to 99 years in prison while his second in command got a 50-year sentence.

Despite their high profile and success rate, the Texas Rangers have a history of funding problems. It was especially bad in the 19th Century, and in the 1920s at one point the Ranger management admitted they couldn’t even get enough funding to cover their medical bills. It’s seemed to continue into the 21st Century, so the Rangers have apparently had to turn to some unorthodox methods of procuring resources.

Most significantly, in November 2018, the Rangers busted a driver in Donley County hauling nearly three tons of marijuana and THC. Chapter 59 of Texas Code meant that the Rangers could sell off the vehicle at auction. However, short on funds and with a large area to patrol, by May 2019 the Rangers had converted the vehicle into a mobile command center. It had, after all, been converted with enough technology that it was valued at $270,000. Thus did the Rangers oversee one of the most cost-effective times that criminals gave back to the community.